Founded in 2001, our mission from the beginning has been “We Turn Gardens Into Art”, and as no two works of art are ever alike, we ensure our gardens are as unique as the clients that inhabit them.

A locally owned and operated business, we moved to a new location in January of 2017, allowing us to expand our services and open the Garden Center.

Our work has been featured in “This Old House” magazine and “Indiana Gardening Magazine” as well as by the national “America in Bloom” organization. Many of Metzger Landscaping & Design’s gardens and landscapes have been featured bi-annually on the distinctive “Welcome to my Garden” Tour.

Always interested in partnering with the community, we are excited about the opening of  The Gardens Event Center.

This article originally appeared in the Jan. 31, 2018, issue of the North Manchester News-Journal.

This year’s Commerce of the Year award recipient is Metzger Landscaping & Design.

The award was announced at the 74th Annual Chamber Membership Dinner Thursday, Jan. 25.

“The 2018 Commerce award goes to a business that deals in products and services intended to help its customers solve problems, enhance their properties and enjoy nature and their living environment,” Lawrenz said.

“Metzger Landscaping has grown significantly since its inception and their goal is to continue to grow steadily while still serving customers with quality, integrity and attention to detail.”

Lawrenz noted that Leesa Metzger founded the company in 2001, growing it to 625 accounts and a location on State Road 13 just south of SR 114.

He highlighted Metzger’s educational background in botany, horticulture, greenhouses and agriculture, and said that she learned farming at a young age after the death of her father.

“Her brothers taught her how to operate all the farm equipment,” he said, “and she gained valuable farming experience as she helped them with planting and harvesting.”

Metzger, who attended the dinner with her family and staff, accepted the award plaque with a short speech. “Thank you for recognizing Metzger Landscaping for this honor,” she said.

“We are humbled to join the ranks of the fine businesses that have been honored before us.”

Metzger quoted John Cougar Mellencamp’s “Small Town,” saying “The reason I’ve always liked that song is because it reminds me of where I came from, where I am now, and where I’ll always be.”

She noted that, while she didn’t grow up in North Manchester, her husband, Steve, did, and they have lived on his great-great-grandfather’s homestead for 20 years.

“Steve is a busy dairy farmer and he’s an incredibly talented mechanic, and he’s fixed a heck of lot of equipment I’ve broken over the years,” she said. “Often, after a long day on the farm, he’d pull what he was working on out of his shop, to have my equipment working by the time I needed it again the next day.”

The landscaping company’s move from the Metzger homestead to SR 13, Metzger said, was beneficial.

“I’d outgrown our space at our farm even after I built my own barn there,” she said. “We jumped at the chance to purchase the old state highway garage so that we could expand our business, and in doing so, hopefully we’ve helped spruce up an entrance to the town as well.”

Metzger also thanked her daughters Lauren, Sarah, Kayla and Kelsey, who help with a variety of projects.

“I’m proud of them and I know someday they’ll be employable with a decent work ethic,” she said.

Thanks were also given to Metzger’s employees: Randi Freel (nursery and office manager), Matt Ozenbaugh (Greenkeeper turf manager and mechanic), and the landscape maintenance and installation team.

“Thank you for letting us turn your gardens into art, keeping your grass green and building your retaining walls and patios and waterfalls and all sorts of things that we are proud of creating.”

Metzger Landscaping & Design is affiliated with the following organizations: 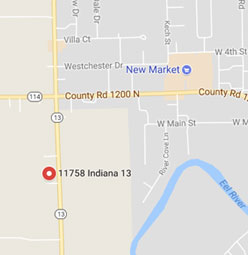